From the dawn of civilization, lubricants have helped make it easier to slide objects past one another. Olive oil helped ancient Egyptians maneuver massive stone blocks into pyramids, and later melted animal fats greased chariot wheels. Up until the 1970s, oil from sperm whales was used to grease automobile transmissions.

Today, a wide variety of lubricants, mostly made from petroleum, are used on the threads of bolted joints. These lubricants can be wonderful—

• Lubricants ease the amount of torque required to get the bolt properly tight, so you use your energy more efficiently.
• Lubricants provide better wear resistance, allowing surfaces to slide smoothly across each other—especially important for some materials like stainless steel, which tend to cold-weld, causing galling and embedment.
• Lubricants make disassembly much easier and prevent rust and corrosion, which can permanently weld surfaces together.

Torque is not always Tight

Obviously lubrication of threaded bolts has lots of benefits, but with it comes the overriding concern that the lubricant will change the torque required to develop proper tension on the bolt—and how that could affect the integrity of the joint. Some estimate that adding a lubricant could reduce the required torque reading by up to 40 percent!

So for example, let’s say a company has always used a torque of 100 ft-lbs to install a bolt in a certain application, and let’s say that that 100 ft-lbs was spec’d for use with dry threads with no lubricant. Then one day, an operator says, “Hey I read this article that said thread lubricant is good for the bolted joint to reduce wear, so I’m going to try it.”

But when they apply the lubricant and then use that same torque spec to tighten it down, they wonder why the threads got damaged or the bolt head broke off.

That’s where some of the caution about using thread lubricant comes from, and why some companies might decide that, even though it has beneficial properties, they won’t use it because they’re not sure what the effect on bolt tightness will be.

A Culture of Torque

The industry standard is to use torque as an indicator for bolt tightness—and that’s where the problem begins.

Torque is a rotational or twisting force, but the torque reading on a wrench doesn’t guarantee that a bolt is tight. That’s because the real holding force is caused by the inclined plane of the threads pulling against the bolt head. In fact, even though you can’t see it, a tightened bolt has been stretched a microscopic amount, and this stretch is called Tension.

Just like a stretched spring, which tends to pull back into its original shape, a stretched bolt tries to pull itself back to its normal state. It’s this pulling back force, called the “clamp force” that actually maintains the tightness of the joint.

So, torque isn’t the true measure of bolt tightness—it’s tension.

But lubrication on the bolt threads—and a whole host of other factors—can cause fluctuation in torque readings. So once you add a lubricant of any kind to the threads, all bets are off as to whether the same torque setting will truly secure the bolt. That’s because nobody really knows how the lubricant affects the torque measurement on a bolt without performing a scientific study using expensive lab instruments.

So if you can’t trust the reading on a torque wrench to indicate whether a bolt has been properly tightened, what’s the solution?

What if you could take lubricants completely out of the concern column by directly measuring tension, the true measure of bolt tightness? Or, to put it another way, what if you could use the most appropriate type and amount of lubricant for your application, and never have to be concerned about its effects on the tightness of a bolted joint?

With a visual indicator built right in to the bolt, SmartBolts show you clearly exactly how much tension has been created in a tightened bolt, based on how much the bolt has been stretched. And this tension is directly related to the clamp force that’s keeping the joint tight. 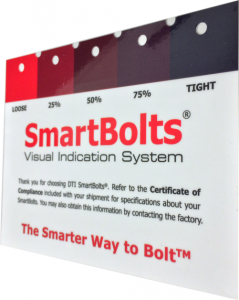 What’s more, you can actually use the visual indicator on a SmartBolt to correlate the bolt tension with the torque measurement on your wrench. This way, it’s easy to select the correct torque to use on all bolts of the same type using the same lubricant throughout your application while ensuring the bolt has been adequately tightened via the visual indication.

When you put SmartBolts to work for you monitoring bolt tension, you can be free from worry about lubricants—or any other factors affecting bolt tightness again.

What is the Nut Factor and How Does it Affect Torque? »