Agrico ordered hundreds of two inch diameter bolts between 14 and 16 ¼ inches long which will be on the job holding the massive slewing bearings together — the most critical components of the custom shiploader currently being built by Agrico’s team.

Agrico Sales is the only remaining manufacturer of high quality custom shiploaders in the USA. This one, being built for a global agribusiness and food company features three 150’ fixed towers. Typically, Agrico manufactures just one of these behemoths per year. Once completed, the large components of the shiploader will be placed on barges and floated to Destrehan, Louisiana, some 20 miles away, where it will be put to work loading vessels with grain at the rate of 120,000 bushels per hour. 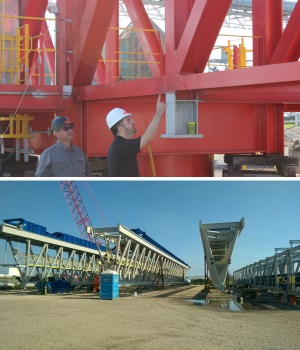 Finished components of the shiploader are waiting to be placed on barges.

The most critical components of the shiploader are the three 12 foot diameter slewing ring bearings. As the massive slewing bearings rotate, it allows the whole ‘building’ to rotate, so the fasteners must withstand all the forces the crane has to hold and is the most important part of the shiploader. This is where Agrico’s Project Manager, Gary Handbury decided that our SmartBolts technology was required in order to provide constant monitoring of the tension holding the slewing ring bearings together.

Gary commented, “We were looking for a system where we could visually verify the tightness of the bolts. We want our customers to have complete confidence that our shiploader will operate reliably and safely. The clear visual indication of a loss of tension is reassuring to workers and inspectors alike — and I was really happy to see the consistent results when we tested the heavy duty SmartBolts.”

In order to test the SmartBolts performance prior to installation in the slewing bearing, Charles and Chris watched as two burly Agrico ironworkers installed a giant pneumatic torqueing tool (capable of applying 8,000 ft-lbs of torque) on the nut underneath, while a third held the head with a long-armed wrench. This tool would allow them to develop the necessary 230 kilopounds-force to properly tension the 2” diameter SmartBolt.

According to Charles, “Together with the installation team, we conducted a test to establish a torque/tension relationship by measuring the torque required to develop varying levels of tension in the SmartBolt. The SmartBolts Visual Indication System allows tension in the SmartBolt to be measured by inspecting the color indicator with the help of a color match card known as the Verification Guide. The workers were impressed at the ‘new technology’ that the SmartBolts offered, and we educated them on the principles involved and the ability of this trial to tune their torqueing process to apply the proper tension. They were knowledgeable about bolting practices, and picked up the new concepts and methods quickly.” 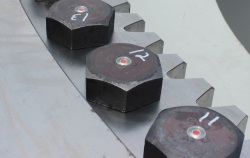 Heavy-duty SmartBolts are numbered in order to follow a carefully planned tightening sequence.

Charles continued, “The next day, we went out to the yard where Agrico is building many of the components of the shiploader, including the all-important slewing rings. We climbed up 30 feet to watch the crew install the first 72 SmartBolts through holes in the cradle of inner ring of the slewing bearing. The bolt heads were numbered so that a carefully planned tightening sequence could be followed. The giant torqueing tool was set up according to the torque/tension relationship we had learned in the trial. Then the initial tightening sequence was applied to the SmartBolts array, one bolt at a time. It was a very labor intensive and methodical activity that took several hours to complete.”

Charles and Chris needed to return to Maryland before all the bolts were installed. In a follow up call, Project Manager Gary Handbury stated that the installation of the bearing bolts was nearing completion, and all had gone well and according to plan with the SmartBolts. The Agrico team continues the massive shiploader build which is expected to be complete and ready to begin its voyage down the river by the end of September where it will be installed for the agribusiness and food company at their docks.

Liberation from the Impact of Lubricants on Torque Readings »