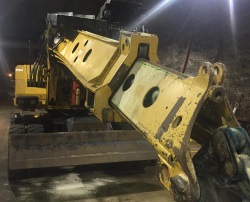 The massive Gradall Scaler workers had to crawl under.

Imagine going to work one morning and having to crawl into a 2-foot wide gap under a 37 ton machine to tighten 50 bolts whether they needed tightening or not!

That’s not the way anyone wants to start off their day, but unfortunately for the underground team at the Ojibway salt mine, this was the ugly truth.

The Ojibway salt mine is operated by K+S Windsor Salt Ltd. in Ontario, Canada. The company started in 1893 as The Windsor Salt Company Limited and has since become Canada’s largest salt manufacturer. In 1955, they adopted the room pillar mining method at the Ojibway location to produce salt for multiple uses including de-icing. Among the many machines that Windsor Salt uses to harvest salt, two are scaling machines. In these particular machines the turntable has to withstand a great deal of stress. As a result the constant pressure and vibration causes the bolts to loosen, yield, and break. 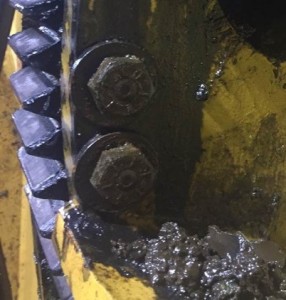 “[The underground team] came up with the procedure to torque check and inspect the bolts on the scalers during regular maintenance every 250 hours. But it just so happens that they are not in a convenient place. We need to use an extension arm just to be able to reach the bolt heads. We also have to have three people working overtime to complete this arduous task.”  – Yasir Anwar, Maintenance Superintendent

Additionally, the scaling machines would be out of service during maintenance, causing a loss of time in harvesting the salt. However, the bigger issue is the potential for serious accidents to occur if the bolt fails.

“A number of bolts on each of the scalers work together to hold on a big Rotek bearing which is what attaches the cab of the machine to the turntable. When a bolt starts to fail, a weak point is created. When that happens, the potential of losing the entire top cab of that machine is highly probable.” – Yasir Anwar, Maintenance Superintendent 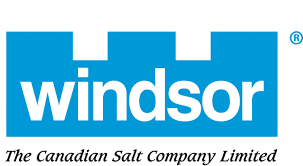 The Search for a Solution…

With all this in mind, Devin Gignac, Ojibway’s Reliability Engineer, called Charles Popenoe, the CEO of Stress Indicators, Inc. looking for a solution to the maintenance issues the underground team was facing.

“He told me that he had researched a number of solutions and when he found the SmartBolts website, he thought our visual indication system could be the perfect answer.” – Charles Popenoe, CEO 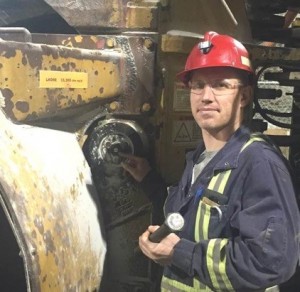 Nonetheless, SmartBolts had never been tested in a salt mine before where the environment is corrosive and bolts would regularly be covered with salt, debris, and grease.

Given the nature of the salt mine environment, the SmartBolts needed to have a protective recess on the indicator. Furthermore, the bolts were topped with a flush of epoxy seal which encapsulated the indicator and offered a wipe-clean surface protecting it from the elements.

Once the scaling machines were retrofitted with SmartBolts, the underground team no longer had to send in three people to run bolt tension checks. Anwar, the Maintenance Superintendent, only needed to send one person under the machine to check the color of the bolts. The worker would count the number of bolts with red indicators, which signified preload loss, and come back with the number of bolts that would need to be re-tightened. This eliminated the element of surprise for Anwar’s team. 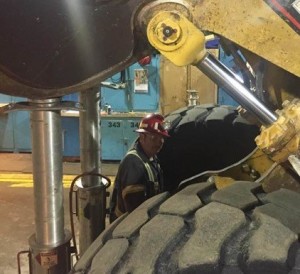 They were able to plan out what needed to be done ahead of time which resulted in less resources being used, less time spent unnecessarily re-torquing all 50 bolts, and less money spent on overtime for workers.

Since the implementation of the SmartBolts the Windsor Ojibway salt mine was able to increase operational safety and efficiency, decrease used resources, and decrease maintenance costs.

« Rethink Bolting: What Does a SmartBolt Do that a Double-Headed Bolt Can’t?